Other highlights from the household survey:
Colorado’s labor force decreased by 2,300 in August to 3,193,200. The share of Coloradans participating in the labor force was 68.3 percent last month. The state continues to experience a faster rate of recovery in the participation rate than the U.S.

The number of individuals employed in Colorado grew by 4,700 in August to 3,004,200, which represents 64.2 percent of the state’s 16+ population. Colorado has one of the highest employment-to-population ratios in the nation, ranking 7th in July.

The Colorado counties with the highest unemployment rates in August were: Pueblo (7.9%), Huerfano (7.8%), Las Animas (6.8%), Fremont (6.5%), and Adams (6.2%). County-level unemployment rates are not seasonally adjusted and are directly comparable to Colorado’s August unadjusted rate of 5.4 percent. 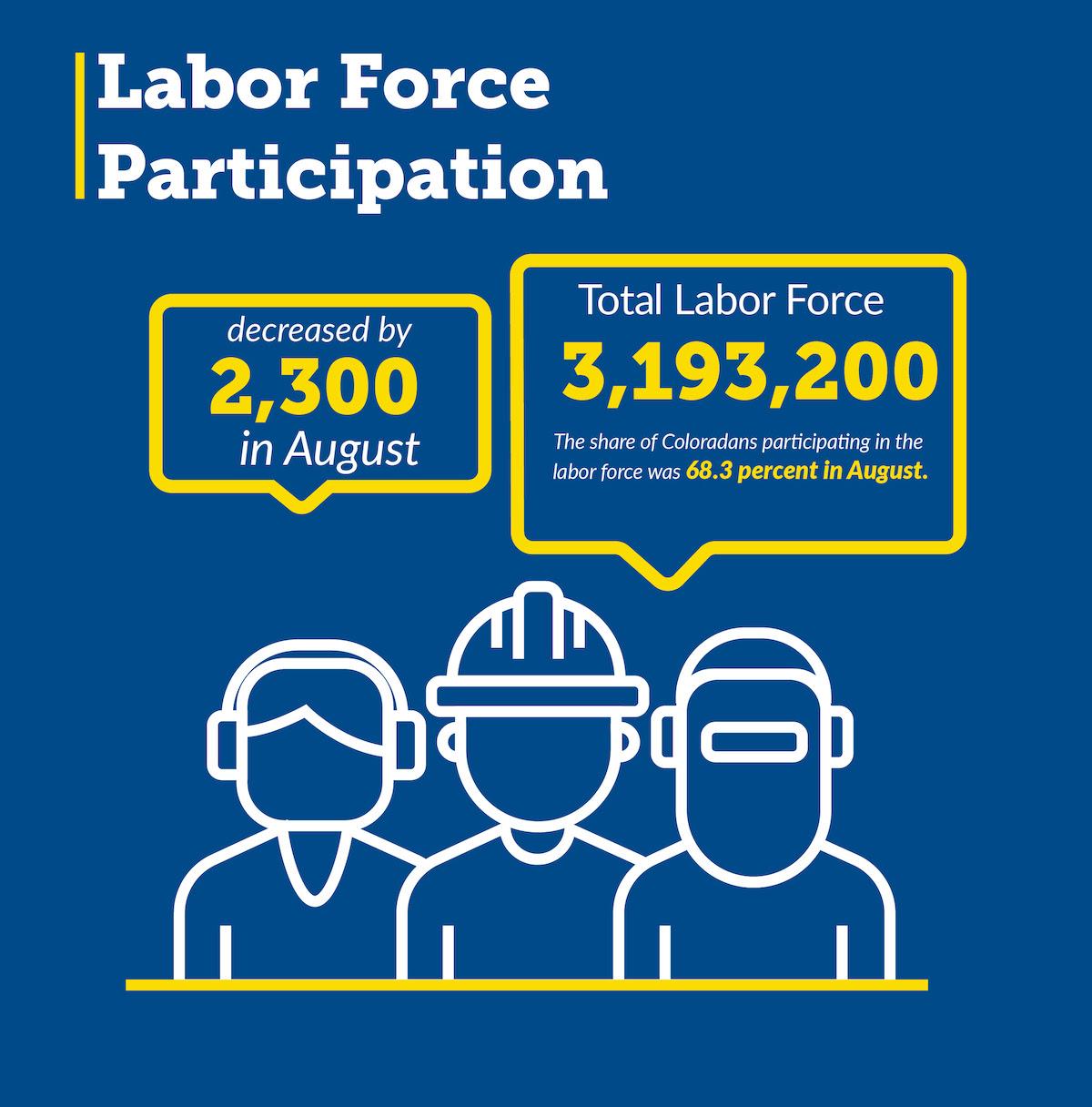 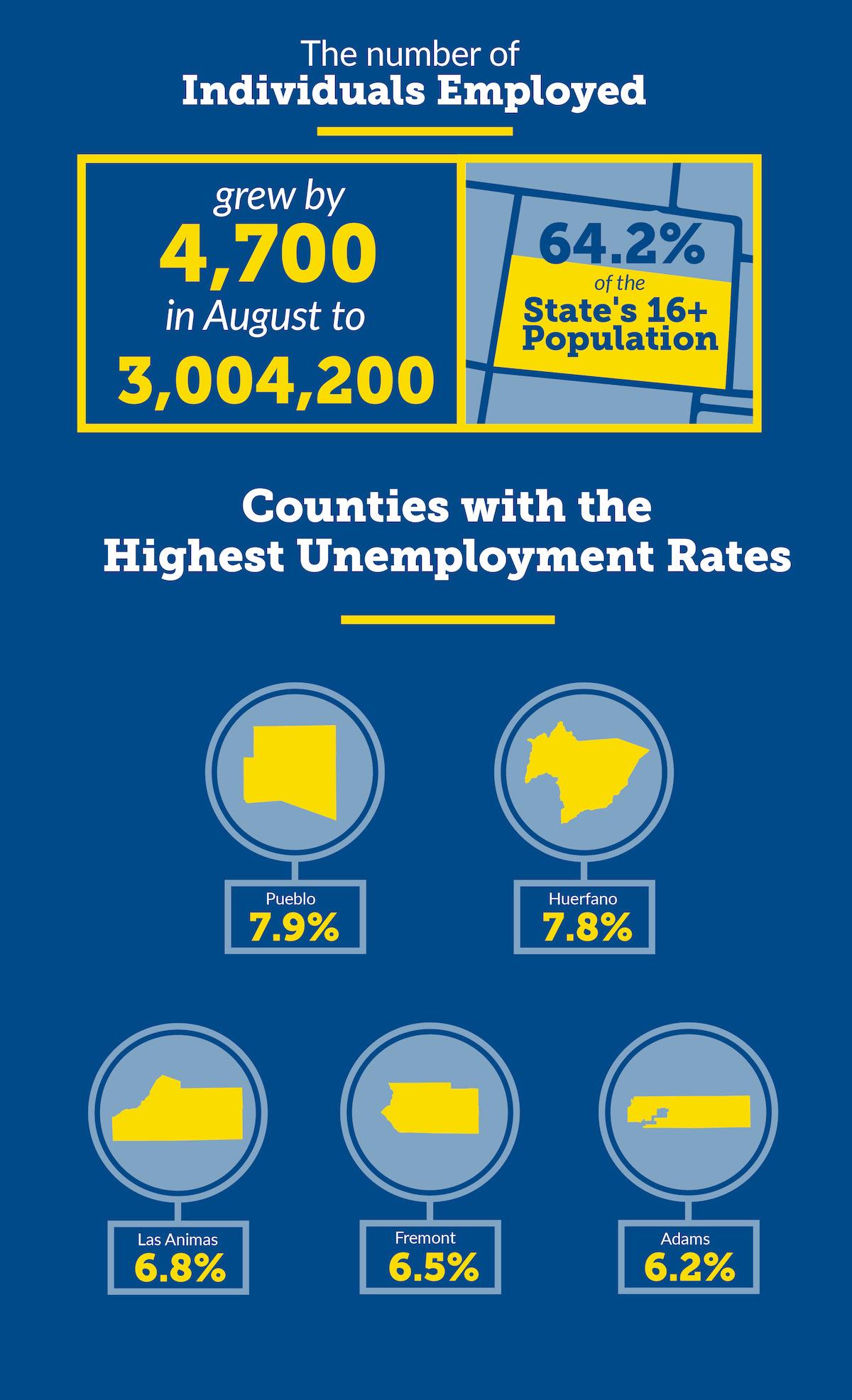 Employers in Colorado added 5,600 nonfarm payroll jobs from July to August for a total of 2,736,600 jobs, according to the survey of business establishments. Private sector payroll jobs increased 5,000 and government added 600 jobs. Over the past 16 months, Colorado has gained back 293,400 of the 375,800 nonfarm payroll jobs lost between February and April of last year. That translates to a job recovery rate of 78.1 percent, which exceeds the U.S. rate of 76.2 percent.

July estimates were revised down to 2,731,000, and the over the month change from June to July was a gain of 12,200 rather than the originally estimated increase of 14,800 (monthly revisions are based on additional responses from businesses and government agencies since the last published estimates).

Private industry sectors with significant job gains in August were: leisure and hospitality (~3,700), other services (~1,900), professional and business services (~1,500), and trade, transportation, and utilities (~1,100). Significant over the month private sector job loss occurred in education and health services (~1,600) and financial activities (~1,200).

The September 2021 Colorado Employment Situation will be released at 8:00 AM on Friday, October 22, 2021. The full schedule of release dates for calendar year 2021 estimates is available at http://www.colmigateway.com.

This release provides information on industry employment and labor force statistics for August 2021, the most current estimates available from the Colorado Department of Labor and Employment. The reference period for the establishment and household surveys was the pay period or week that includes the 12th of the month. Therefore, this release provides an estimate of Colorado’s employment situation as vaccination rates among the adult population continued to increase and pandemic-related restrictions were relaxed for businesses across the state. Additionally, the August reference week overlaps a period in which COVID-19 case rates for Colorado and the nation increased due to the Delta variant. For information on Colorado unemployment insurance claims activity and related statistics, visit www.colmigateway.com. For information regarding impacts to Bureau of Labor Statistics data collection and processing during the pandemic, go to www.bls.gov/bls/bls-covid-19-questions-and-answers.htm.